Up Close with Jimmy Barnes

Up Close with Jimmy Barnes 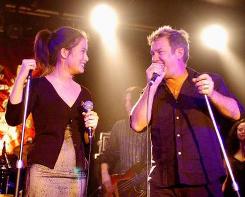 It seems like rock star Jimmy Barnes has been around forever. In a career that has spanned more than 25 years, ‘Barnsey’ is now up to his 16th solo album, entitled “Double Happiness”.

This album is particularly special to the singer, as this is the first time he has sung with big brother John. The album also features duets with all five of Jimmy’s children, including youngest daughter Elly-May, who has cerebral palsy.

In a career that began at the tender age of just sixteen and a half, this former ‘wild boy’ has notched-up a dozen number one albums (seven of which debuted at number one) with Cold Chisel and as a solo performer. This impressive record puts the ‘adopted’ Australian rock legend in the same league as The Rolling Stones, Madonna, The Beatles and Rod Stewart.

Say the words “Cold Chisel” and it’s easy to be transported back to the heady days of pub rock - a unique time in Australia’s music history when a group of long haired, energetic musicians led by the screaming vocals of a young Scottish immigrant – named Jimmy Barnes - literally leapt onto the Aussie music scene and went on to become one of our most successful groups.

Over the years, Jimmy has performed for intimate gatherings of just 20 people right up to packed arenas of more than 50,000 fans. But it was the opening and closing ceremonies of both the 2000 Sydney Olympics and Paralympics that stand-out in his mind as some of the most amazing and memorable gigs of his career.

The Paraylmpians, in particular, struck a chord with him. "I think the athletes at the Olympics opening ceremony were also thinking about their particular events,” he says, “but the Paralympians were just so appreciative of me being there, and there was real feeling of ‘I’m here and I’m celebrating life’ – it was beautiful."

It’s amazing and refreshing to see that ‘Barnsey’, who turned 49 this year, has still got ‘it’ - especially in this celebrity-obsessed era, where appearance reigns over substance. Apart from hard work and a passion for music and performing, Jimmy sees family as the major reason for his longevity in an industry that’s notorious for disposing of its stars quicker than you can say “working class man”.

“When you start having kids, that keeps your feet on the ground – it’s very difficult to think too much of yourself as a rock star.” Jimmy admits with his usual candour. “I mean, you can be a rock star one minute and changing nappies the next.”

Having five children is quite a brood and, when one of them has cerebral palsy, that can add another whole dimension to the family dynamics. When the baby of the Barnes clan, Elly-May entered the world at 14 weeks premature, doctors were not sure she would survive. Although in shock, Jimmy and his wife Jane were determined to spend every minute with their baby, virtually setting-up camp in the hospital where one of them could be with her 24 hours a day.

At the time, doctors said their constant vigil of touching, talking and singing to her was integral to Elly-May’s survival.

Although not officially diagnosed with CP for some years, the Barnes’ knew that being born so small would greatly affect Elly-May’s development. As a premature baby, she was fed oxygen through a tube that sometimes can incur brain bleeds. This happened on the left side of Elly-May’s brain which has since affected predominately the right side of her body. Consequently Elly-May has always walked on one toe, which makes her hip slightly turn. “We are very, very lucky – it could’ve been a lot worse.” Jimmy is quick to point out “I mean, we feel blessed that we’ve got her – we don’t feel that it’s a throw back or that our lives have been ruined – we’re just blessed to have our baby with us.”

In seeking the best care for their daughter, for many years the Barnes’ have utilised the range of services available in NSW. Having casts on her legs followed by Botox injections, numerous experimental shock therapies to stimulate her muscles and a recent operation to extend the tendons in the back of her leg, would test the best of us. However, having a supportive family and understanding teachers and friends has ensured Elly-May, now sixteen has enjoyed a relatively ‘normal’ childhood. Despite missing a lot of school and enduring the stares and pain that comes with living with CP, Elly-May, is in her father’s words, “a tough kid, a real battler and a very funny girl.

She’s a real loving kid. You couldn’t ask for that from anybody else.” Having cerebral palsy has certainly not stopped Elly-May from enjoying life to the full. She can speak French, is a talented artist and has a great singing voice that can be heard in a duet of The Jackson Five hit, “I’ll Be There” - which she performs with her father on his latest album, "Double Happiness". At the end of the day, having a happy and healthy family is clearly all that matters to Jimmy and, with five very talented children, he has every right to be a very proud father.

“Stay honest, keep your head down, work hard and don’t expect a free ride. Everything comes with a price and, if you take it now, you’ll pay for it later. So just enjoy yourself, but work hard.” is Jimmy’s sound advice for up-and-coming rock stars. When we think about it, it’s good advice for anyone wanting to achieve their goals, no matter what their ability.