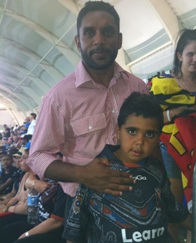 Three years ago my grandson Garnett Donnelly was a healthy little boy, then all of a sudden, out of the blue, Garnett had a seizure.

Garnett continued to have seizures, but the main concern was that he would have a stroke.

After an MRI in November 2011, Garnett was diagnosed with cerebral palsy. His cerebral palsy has not only affected his right side, but also his learning abilities. We have had numerous appointments with physiotherapists, doctors and specialists, and we are now awaiting the next available appointment with the Children's Hospital in Brisbane.

Garnett continues to try and be a normal little boy but knows that there are certain things that he can't do. Being careful slows him down.

As parents and grandparents we just want to wrap him up in cotton wool, but know that we are unable to do so.

Garnett's parents Tracey and Garnett are doing a fantastic job.  We, as grandparents, try to help as much as possible to give them a break.

Garnett loves to play football and it is his favourite sport and activity. He follows every NRL team because he cannot pick between any of them. His favourite NRL player is Preston Campbell.

I am so proud of Garnett. He will try anything. He never says he can't do anything and always has a go.

Garnett has difficulty speaking. Although he is about to turn 8 years old he speaks like a 4 year old. We always help him with his speech and frequently take him to a Speech Pathologist.

We enjoy watching Garnett as he is a big inspiration to us. He is a champion in his own special way.