The Power of One

The Power of One 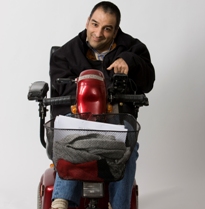 Christian Astourian has a keen mind and a good sense of humor. He speaks four languages – Italian, Greek, French and English – and, although born in Melbourne, the fact that he spent half his life living in Milan tells in his accent.

At 37, he is passionate about community causes, runs his own consultancy and serves on several boards.

He has been a Board member of Scope for three years and serves on the board of DASSI (Disability Attendant Support Service Inc). His company – Wings of Freedom – which numbers non-government and government organisations in its client base provides communications, consulting and awareness training.

He moved to Brunswick seven years ago to be closer to Melbourne University, while studying for a Computer Science degree.

Most of his friends live in Brunswick. Describing himself as a "human rights activist", in November 2006 he decided to run in the Victorian State Elections as a candidate for the fledgling People Power party in the lower house seat of Brunswick (in Melbourne’s inner northern suburbs).

"I wanted to challenge the community, the government and the system," he says."I was talking about issues I felt of importance to the whole community.

"I chose People Power because they gave me the opportunity to be involved in politics and run as a candidate. I didn’t have previous experience, so it had to happen with a new party."

Christian Astourian has Cerebral Palsy. It affects his speech and his mobility.

So campaigning was never easy. "I do believe it did challenge people to look at someone with disability differently. It can be difficult to understand me when I speak, or to see my mobility issues. But they can see me as a person and what I can do for them, rather than physically. It was an opportunity for disability awareness."

Yet an even larger part of the difficulties of campaigning had nothing to do with disability. "Strangers on the street talked to me about their local concerns, wished me good luck and declared me an inspiration because I talked to them and listened to their issues," he said on the Perspective program on ABC Radio National in February this year.

A clear indication of this can be found in an excerpt from a letter sent by one Moreland resident, after being stopped in the street by the campaigning candidate during the lead-up to the elections:

More importantly, I was astounded by the fact that, although the normal run of politicians won’t bother to talk to me (must be my long hair!), here was someone who looked beyond my appearance and made the effort to tell me their plans."

Christian Astourian has spent 15 years breaking down the physical and social barriers that stop people with disability from being able to participate in society.
"Decision-makers are, by and large, cut off from disabilities and there’s the longstanding attitude that all minorities should be happy to get the scraps from the table reserved for the dining pleasures of the able-bodied and the mainstream," he said on the Perspective program.

"I depend on a scooter for transport and my posture would challenge even the most devoted yoga goer. My speech means that I’ll never be featured in a live TV debate. In short, I’m like lots of people with a disability. Yet my hope is to see more people more or less like me run for office.

"Like other minorities in parliament, ultimately I want a disabled person to be elected with respect for their differences but not because of them. And just like members of other minorities, I see no reason why a disabled MP should be restricted to contributing on disability issues. After all, there are plenty of issues to go round."

He is proud of the fact that, as a new campaigner, he snared 1.5% of the primary vote – 550 votes, to be exact. Although the candidates for the Labor and Greens parties gained around 16,000 and 14,000 votes respectively, all other candidates polled in the range of 500-800 votes each.

That puts Christian Astourian firmly amongst the pack. "Most families include someone with some kind of disability. Yet, despite our numbers, governments – and most of the people who vote for them – continue to treat disabled people as ‘other people’.

The Victorian Government’s Department of Infrastructure Transport Plan 2006 says full disability access to public transport can wait until 2036. There’s still no legislation in the Housing Act to make new houses physically accessible and there are waiting lists of up to three years for equipment such as wheelchairs. People with a disability live in poverty more than any other group outside indigenous Australians," he says.

"I am a strong believer that, with regard to disability, things are going to get better. To live in a community that is more accessible to and inclusive for everybody. I have no doubt that it will happen, because it’s part of evolution in humanity. But how long do we have to wait? Which generation is going to take responsibility to implement changes and speed-up the process?"
Asked if he is likely to ever run for politics again, Christian Astourian grins and admits that’s the "million dollar question … I’m not sure if I would run as a candidate again but, if I do, I’d be an independent."

Meanwhile, he has a much greater vision in mind. "I always want to learn more about the world we live in. It’s important for me as a person to give a meaning to my life. If I can do something to inspire other people’s lives or the society we live in, I would think my life was worthwhile. I use as my own inspiration an extract from a Ralph Waldo Emerson poem: To know even one life has breathed easier because you lived, this is to have succeeded."