Some angels have wings....mine has wheels :o)

Some angels have wings....mine has wheels :o) 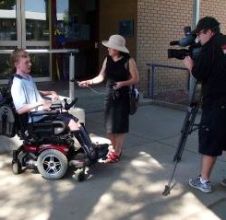 My 17 year old son, Timothy, with help from his Physiotherapist has just received & used funding (it has taken 18 months to get it) to have a ramp and automatic doors placed at the front of his school library.

He has had to use a small back door (which is not always open) to access the library and disability toilet. The door entrance was just big enough for his electric wheelchair to pass through.

The photo (left) is a photo of the opening just before the local news interviewed him. Read the full article.

Timothy wanted the local community to know that his school now is more 'special needs friendly' and to let people know that IT CAN BE DONE IT'S JUST TIME AND A LOT OF PATIENCE BUT MOST OF ALL HOPE!!!!

The school Timothy attends is Wodonga Senior Secondary College in Wodonga, Victoria.  He is currently in Year 11 and this is his second year.

The school was not at all disability friendly when we enrolled him. Thanks to his persistence, the school has now put in many ramps, even renovated a toilet for Timothy and implemented numerous other initiatives.

Tim also wanted to be enrolled in the VET AFL class as he is a keen "sports nut" as he puts it but we were unsure of how this would work due to the practical side of things.

The kids learn how to play AFL basically, but his teacher Matt Moylan was extremely open to Tim joining the class and even worked out a program so that he could participate in the practical side.

Matt Moylan explained to me that when the other boys were playing on the field, Tim would video, ref & umpire the games, also time keep.  With the videos he analysed them and did reports. Tim was ecstatic as he said "no matter what I want to be a part of that class, just because I'm in the chair doesn't mean I cannot be a part of the class." So he did and he has had a wonderful time and is doing it still this year.

Tim has also started mentoring younger children who are coming up to high school and with their special needs are struggling a little and wondering whether they can do it or not.  He has been involved in a programme with his speech therapist to visit grade 3 and 4 and teach them a little about kids and people with special needs. His message is to not be fearful and to help kids understand more about disabilities and the amazing people who are just like you and me.

He has a great leadership attitude and is positively choosing to use his gift to reach his goals.

Tim in the media - watch Tim on Prime 7