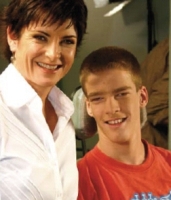 "I had been a newsreader for just a fledgling four years when my wonderful sister Melinda had William, her third son.

We were all looking forward to his birth, especially me – because I was to hold her hand during labour and, when the going got tough, I was to distract her with my tap-dancing.

But there were complications that we hadn’t ever dreamed of, and Will was born fighting for his dear little life.

Right from those first seconds, he's been a fighter and an inspiration to us all.

Diagnosed with quadriplegic cerebral palsy, Will is completely dependant for all his needs - but he gives back so wonderfully, and readily! His beautiful smile and his courageous battle with the simplest tasks in life, both humble and delight us with his wicked sense of humour. He's fourteen now - and absolutely adores horses, motorbikes and any sport where people struggle.

I guess that's what he relates to best - not the physical battle, but the mental toughness that's needed each and every day.

Through Will, and the Cerebral Palsy Australia’s QLD organisation - I've met others with CP... and I've been humbled to realise, they all share one amazing trait. They never feel sorry for themselves, and never complain. I love Will so much. When my girls are galloping around on their horses, he watches - never lamenting that he can not, and will not, ever join in - instead he urges them to go faster, or wilder!

He's such a dare-devil! God bless the Riding for the Disabled volunteers who grant him his dream every Tuesday. What a wonderful bunch of people.

I think it is Will's amazing strength of character that draws people to him. The worst I've heard him complain was quietly and simply “Damn this cerebral palsy”. That was it. His friend Michael Piniis a grown man born with CP, but he has endured, and studied and become so clever - he has a senior position with the AustralianTax Office, and they fly him around the country to participate in both internal and external forums. Can you imagine! Speech impaired, but brilliant enough to make himself heard, and heeded in the business world.

Michael's an incredible mentor for young Will. His greatest advice was to always use manners with people, because everyone is more willing to help when there's a smile attached!

Although it's a tough life for Will we, as his family and friends, are both humbled and enriched by his quiet grace. He didn't deserve it - but he accepts it bravely. The next time you see someone on the street with CP, don't look away - tell them "Good on yamate!"