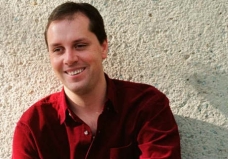 From an early age, singer songwriter Tim J. (TJ) James knew that music would be his life.

“When I was four years old, I remember sitting in a beanbag watching TV and being absolutely mesmerised by Elvis Presley,” he says. By the tender age of seven, he had discovered KISS, and his teachers were so concerned about the influence of the rock band that they wrote home to Tim’s parents.

“I started off playing the drums although, in hindsight, I don’t think I was that coordinated,” says Tim, who has Cerebral Palsy (CP). “I can’t remember being conscious of my CP. I didn’t know any different. My parents and their friends never treated me any differently, so I always just had the attitude to get on with my life, even from a very young age.

“I used to get teased a lot at school, but then changed schools where the teachers and other kids were much more understanding. It also helped when I met an inspirational music teacher who was a classical pianist; he could even sight-read music upside-down. He was very encouraging and boosted my confidence in my own ability,” Tim said.

Later he turned to the keyboard because of its “melodic” quality – “my parents were probably pleased by that choice as well,” he quips.

“Despite years of music lessons, I still prefer to create music by ear. I live and breathe music. It’s pretty much the only way I’ve made money since leaving school.

My mother camearound to the idea of music as a career and my Dad told me how proud he was of me. I think they’re surprised that I’ve persisted with it,” he said.

Tim credits his wife Lucia for a lot of his success. “We were friends for a long time before we began dating,” he says. “Even though I knew I wanted to be with her for the rest of my life, I still had to make sure she’d be happy staying with a musician whose life ambition was to fundraise.

She went away for a week to think about it and, luckily, she came back. She’s been amazing, plus she has the most fantastic smile in the world!”

Despite music truly being his life, Tim’s passion is for even more than his beloved music. “I donate 20% of my album sales to Cerebral Palsy Australia and Cerebral Palsy organisations across the country. It’s not a lot of money at the moment, but I intend to do this for the rest of my life, so I’m hoping there will be a good sum by the end of it all! It takes me a lot longer to break even, but that’s OK. It’s not like I’m not surviving. My dream and my goal for the rest of my life is to help kids with CP.”

Tim James has playednational tours forCerebral Palsy Awareness Week and markets his music around the world. He aims toinspire children and adults with Cerebral Palsy worldwide.

Anything is possible!” says Tim James.

Buy a CD and visit the TJ James website.