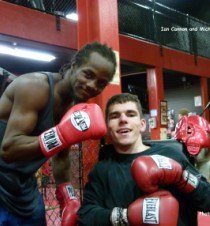 I had the pleasure to speak with Connecticut native and wheelchair boxer Ian Cannon who has cerebral palsy spastic quadriplegia. This is a condition that affects the limb movements in which the nervous system does not work effectively and results in difficulty with movement or mental capability.

Ian’s daily activities and obligations are not typical of an 18 year old. He requires help from his family, friends and the medical field. Ian is faced with more challenges than the average person faces each day. No one will ever understand what it is like to be in Ian’s shoes. Do you remember the first time you rode a bicycle or the time you slid into home plate to make that winning play? What about that new dance step you practiced and practiced until you got it right. Don’t you think for one moment Ian would love to experience all those things and much more?

We will never comprehend the amount of challenges that he faces in life and as a true athlete along with the feelings he experiences when there is negativity that goes along with the stigmatism from society. Some individuals cannot grasp in their own minds what he has overcome in his. Depression is just one of the feelings he overcame. The challenges he faces and faced are so small to each of us but in Ian’s eyes they are a major achievement. He is very appreciative to the people that have helped him throughout his life and career. Think for one moment while Ian is doing boxing mitt training the difficultly he sometimes faces in just raising his arms to make contact with the mitt or just putting on a pair of boxing gloves.

Sometimes I am guilty of being lazy and quit after a couple of rounds on the heavy bag. Ian is a true athlete and pushes himself beyond his own limits.

All in all, Ian’s condition has not hindered him from following his passion for boxing. Ian is a well-liked, strong individual who refuses to let cerebral palsy stop him from achieving his goals in life. You are probably wondering since Ian is confined to a wheelchair how in the world does he box in the ring?

Back in April 2011, Ian was part of a show that was presented by Hard Hittin’ Promotions at the Connecticut Convention Center in Hartford, Connecticut. When I attended the show, I too was just as curious as the next person. Ian fought former New England Golden Gloves Champion Luis Reynoso of Springfield, Massachusetts in a 3 round wheelchair boxing exhibition. The match took place under amateur boxing rules. Both fighters were firmly positioned in a wheelchair in the ring and Ian was jabbing and throwing all sorts of punches toward his opponent. In the end Ian was victorious.

An interview with Ian Cannon

PATTEE: How did you feel going into the match and after you won?

IAN: Going into the demonstration there is always an element of excitement whether the work I put in is really going to do my reputation justice. It’s totally a mental game with me. Like a chess game. I’m always hoping that my body will listen to what my mind is telling me to do.

PATTEE: How did you get into the sport of boxing?

IAN: Believe it or not my mother got me into the sport. There was a local gym in the area and one day after a meeting at school I asked her if we could go by and take a look at it. Once we did I began going once a week. Then once The Lions Den opened I started going more frequently, up to six times a week and I started training with Chris Lombardi. While there, I built a team with former New England Golden Gloves Champ John Red Shea, Muay Thai Champion Jason Gruzcka and for conditioning, former light heavy weight professional and striking coach Peter Welch. Those are also the ones I work with presently.

PATTEE: Now there has been some chatter about you going to England to fight. I’m sure this is a dream come true for you. Can you tell me more about it?

IAN: Well what I would say there has been some chatter about this but it is in the infancy stage. I’m not committing to any fight yet but we are exploring the possibility.

PATTEE: Who are we?

IAN: My training team, my family and myself.

PATTEE: You are known as Ian “Rollie Two Guns” Cannon. This is an interesting name. How did this come about?

IAN: It came about through former New England middleweight and WBF Intercontinental super middleweight John Scully who is sort of infamous for creating nicknames for local fighters. He called me “Rollie” because I used to roll around the gym and talk to people. Then he started calling me “Rollie Two Guns” because my arms started getting muscular development.

PATTEE: How many exhibition fights have you had?

IAN: I have had a total of six.

PATTEE: Were they all local?

IAN: Two were in Massachusetts and four were in Connecticut.

PATTEE: A few years back, you started the program “ROLL WITH THE PUNCHES”. You wanted to help other people who are wheelchair bound to strengthen their muscles, gain flexibility and obtain more confidence. I am sure you have been an inspiration for other people who have a disability. How did you get started in this program?

IAN: I started noticing increased flexibility in my lower back and upper extremities. I felt that I needed to bring this knowledge to other members of the special needs community. Once I started the program, the individuals that we worked with also noticed incredible success. Currently we are exploring the possibility of several medical evidenced based studies to bona fide the medical benefits behind the program.

PATTEE: Where does this program take place?

IAN: Currently it takes place at The Lions Den, 1385 Newfield Street, Middletown, Connecticut. But it is my dream to expand it to several other locations and one day to a national program.

PATTEE: Who else is involved in this program?

IAN: Myself, Jason Gruzcka, my father and John Shea.

IAN: They should contact myself at The Lions’s Den or Chris Lombardi who is the general manager.

PATTEE: Who is your favorite boxer?

IAN: I actually don’t have one but my favorite boxers are James J. Braddock, Irish Micky Ward and Sugar Ray Robinson.

PATTEE: Is there any particular boxer or individual whom you would like to say thank you to?

IAN: I would like to say thank you to my team, the boxing community as a whole for embracing me and the special needs community.

PATTEE: What would you like to share with others who feel that they cannot accomplish something because of their disability?

IAN: There is a quote that I live by. I don’t want to be a product of my environment and I want my environment to be a product of me. My whole life everything was created and planned for me. Until finally I found the method to develop my own identify and I would encourage everyone to find that so they too can be at peace with their human existence.

PATTEE: Now I have to bring up that one particular photo that is on my facebook page. I still cannot believe the amount of comments, mostly positive and some negative that this one photo generated. To this day, people are still commenting. How did you feel about some of the negativity that was expressed?

IAN: Some people were offended for me about the negativity. But that shows that there is a purpose to want myself and the program it manages to break down the sigma of the special needs community. I am honored to say that I had this minute gift to help change peoples minds. I have no animosity toward anyone about what they said.

PATTEE: You are a freshman at the University of Hartford. What is your major?

IAN: My major is marketing.

PATTEE: What would you like to say to your fans out there?

IAN: Well I would like to say I appreciate their support and interest and their understanding of what myself and others are trying to do. I also appreciate their friendship, underlying encouragement and selflessness always.

PATTEE: Thank you so much for taking the time to speak with me. It’s been a pleasure.
Truly you are an inspiration to everyone who feels they can’t accomplish certain things in life. You are a young, bright and ambitious individual with a future where no one knows where life is going to take you next. Never give up on your dream regardless of how big or how small your dream is. Inside, we are all no different from each other. We all struggle in life one way or another. It’s a humbling experience when we finally realize whom we really are.

Watch a video of Ian Cannon in action.