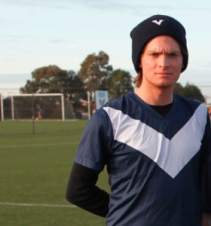 At the age of 12, Ben Roche was one of two people with Cerebral Palsy given the opportunity to train once every 3 months with the Australian Paralympics team at the Australian Institute of Sport in Canberra. In 2003 Ben was invited to join the National team in South America where Australia participated in the world cup and came 10th.

Unfortunately this was not enough to qualify for the Athens Paralympics Games. In the coming years, Ben played a few different tournaments including a tournament in America and the Far East and South Pacific Games (FESPIC) in Malaysia where the Australian team came 2nd. In this competition Ben managed to score his first international goal against South Korea.

At the same time Ben worked at getting a Victorian team up and running, through organising several 'come and try days' finding a few more Victorian players. After Malaysia, Ben took a few years off from Soccer to focus on work.

Ben is currently training at the Victorian Institute of Sport twice a week with a scholarship supported by Football Federation Australia (FFA). He is the Victorian Team Captain and continues to play at a National level. Ben says, “I am inspired by the players around me, I have seen amazing courage and determination and it makes me want to do my best”.

More on 7-aside (CP Football)

The team finished 7th in their first major tournament. 7-aside football is now a fast developing sport with teams represented in QLD, NSW, SA and Victoria.

7-aside Football is played on a field similar in size to a hockey field (75 m x 55 m) and is 7 a-side game. Every player has a classification depending on their range of motion ranging from C5 limited limb movement – C8 free range of motion.

These classifications are restricted to one C5/C6 on the field at any time and a maximum of 2 x C8’s on the field.

The remaining classifications can consist of additional C5 or C6’s plus C7’s.

7-aside Football is played under FIFA rules with a couple of minor changes, which include no offside, and the players are permitted to roll the ball instead of throwing the ball in.

The Victorian 7-aside football team was developed through a partnership with the Australian Paralympic Committee (APC), Disability Sport and Recreation (previously known as Wheelchair Sports Victoria) and Football Federation Victoria (FFV).The Victorian 7-aside football team currently trains once a fortnight at the John Cain Memorial Park in Darebin, Melbourne. New players are more than welcome to come and try or just come to watch.

“7-aside Football is a great opportunity for anyone with a disability of Cerebral Palsy, Acquired Brain Injury, or has had a Stroke. Players work on fitness and Soccer skills in a fun team environment. The teams are always looking for more players who just want to come down for fun, fitness, or for ambitions to one day represent Australia,” Kerry Tavrou, Victorian 7-aside Coach.